Back to News & Resources

Hedge funds are ending the year on a high note as their top picks outperform, according to Goldman Sachs Group Inc.

“Hedge fund favorites have rallied sharply so far” in the fourth quarter after struggling in the prior period, strategists including Ben Snider and David Kostin wrote in a note Monday.

Goldman’s list of most-popular hedge fund long positions has outperformed the S&P 500 by 200 basis points since the start of October. They’ve got some ground to make up, though, as those holdings have lagged the gauge by 4 percentage points so far in 2019.

The average equity hedge fund is returning 10% year-to-date, they said. 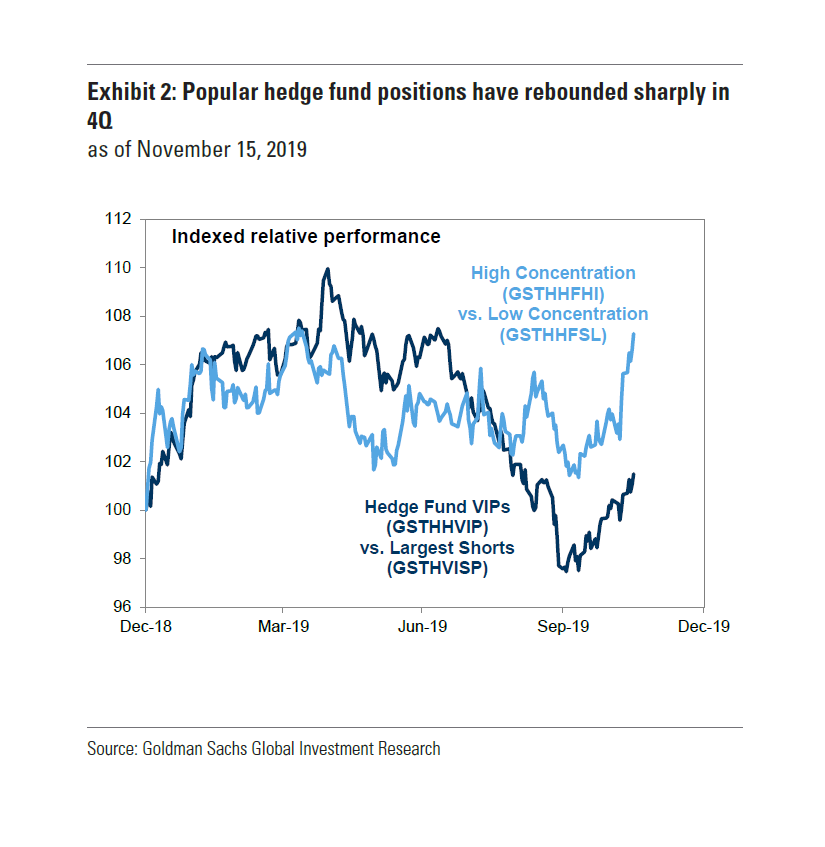 Crowding risk still remains elevated, the strategists said, continuing a theme they discussed in a previous report in August. When rallies peak, too much professional money can try to get out of the same stocks simultaneously and exaggerate declines.

Points from the report, which analyzed 833 hedge funds with $2.1 trillion of gross equity positions and is based on 13-F filings as of Nov. 14, include:

Still, hedge funds haven’t yet tapped into the outperformance of value shares, Goldman said. Fund holdings also show little concern about potential regulation of “Big Tech,” with weights of Amazon, Facebook Inc. and Alphabet Inc. near the highs of recent years. The big overweight in health care reflects little fear of policy risk ahead of the U.S. presidential election.

“Funds have embraced some macro rotations but resist others,” the strategists said.

Want to speak to us?

Our resource section will help you bag your dream job

Capitalizing On Growth In The Private Equity Space

Alan Howard Opts for Trading Over Management to Boost Returns

Smaller private equity deals have outperformed in the last decade

Europe’s private equity firms turn to US for deal opportunities

Elizabeth Warren is right to worry about private equity looting

Former KKR dealmakers strike out to set up own shops

The alternatives industry in a strong position for 2019

Robots to take 400,000 finance jobs over the next decade

Why Point72, one of the world’s top hedge funds, is setting up in Sydney

Worldwide investment fund assets rose to EUR45.65 trillion by the end of Q2 2018

Moving in-house – what are the challenges for managing partners?

The 60 second interview: “Firms are losing top talent due to lifestyle preferences”

CEPRES has released its latest analytics of the private markets landscape showing the increasing dominance of the largest private equity firms on their PE.Analyzer investment network.

The Lawyer Awards: Pinsents triumphs as firm of the year

As popular as the alternative investments industry remains, attracting and retaining investors at a time when asset classes are converging means that managers need to constantly think about how best to differentiate themselves

Why would you… float your law firm?

We have placed cookies on your computer in order to enhance the user experience of this site. For more information you can read our privacy notice.